You are using an out of date browser. It may not display this or other websites correctly.
You should upgrade or use an alternative browser.

Okay, anyone who knows me, knows I am not a reality junkie at all. I usually watch DWTS in the background every couple of weeks and the finale of Idol, but thats about it. So, I tuned to the opener of Big Brother - I am definitely not hooked, but I know the characters by name and am kinda, sorta a little tiny bit watching it

Is anyone else watching?

What do you think of Rachel and Brendon and all the other peeps?

So I take it this is a weekly tv show?

I think Rachel's laugh is annoying....

I think I am not gonna start looking at BB crap except for if I watch it on TV. If you watch the late night show or follow the updates you already know who is on the block and stuff. haha, in my defense for following a reality show - I had the flu for 10 days when it started!!

Fook me, I am so opposed to getting involved in a reality show. We used to have plenty of drama here in the forums for our own show

"You are never too young for botox".

I have never been able to get into Big Brother...but I do watch some really lame reality shows...

Well I was walking through the forum and found this thread and all I can say is Hell Yeah I watch Big Brother!!

I have been hooked since they started this show and have never missed a season!!! I usually get the LIVE feeds and watch it 24/7(yes I have no life), but this season I did not because I have not seen anyone the least bit interesting to watch 24/7. I do have my fav's and keep up on what is happening by going to another website that gives me all the juicy details I am missing by not having the feeds this season. I'm a reality TV junkie ( well depends on the reality)...I guess if I have to pick my fav's this season it would be Brendon (except he needs to get away from Rachel...LOL), Andrew because I think he is funny, Kristen because she is flying low under the radar and being smart about it, and maybe there is some room for Lane because he reminds me of the good ole' southern boys I grew up around....I will have to keep a watch on this thread and see who else is not afraid to admit they like this show...

^^^Ditto on all your picks - cept Lane. I am not a fa of the Birigade. And, Matt is horrible for pretending his wife has a disease.

When Rachel said she would take Brandon over the half mil, I was thinking poor girl. I don't think he is playing "the game" with her, but you have to wonder if it came down to winning if he would put her on the block.

I have literally been sick for 3 weeks on and off... that is my excuse and I am sticking to it.

Oooh, I heart Regan. He is funny.

I agree Ragan is a hoot

and I like him also.....I am not fond of the brigade either and it pissed me off when Matt told that lie about his wife having that disease and now I see the support groups are trying to help her..HELLO...she doesn't have it, he lied....it's stuff like that that makes it hard for us who have illnesses get help..I have Lupus and I struggle every day and when he did that I was ready for him to go home.....Please someone take him out of the game.....

I agree Brendon will take the money over Rachel...

He needs to get away from her because she is the one bringing him down and thats why people are out to get him.......

I am sorry you are sick hun...I hope you feel better soon!!

I think Rachel is annoying. Matt is a big wiener head. I

Regan and Kathy. I'm not sure about the whole Hayden and Kristan thing ? Show time after dark is great back round noise

I don't really watch it

Sooooooooooooo How did we like last nights episode? Andrew went out with blazing and outing everyone

and then after the HOH we had a

with Rachel and Kirsten which now Kirsten is kissing Rachel's ass today in hopes of not going on the block...yeah okayyyyyy.....The feeds today showed everyone going to plead their case to Brenrach as they are calling themselves

I have a feeling its gonna get very exciting in the BB House now that the claws are out....

I loved the Kristen/Andrew fight. Kristen is an idiot. Last night it was like she was trying to antagonize Rachel.


Okay, question.... I loved Regan. I really thought he was on the Bren/Rach side, then I heard him going off on Matt about how much he can;t stand them. Is he playing both sides or did something happen to piss him off? Same thing with Kathy and Brit. I thought they all liked Brendan and Rachel, but suddenly those 2 seem like they are all they have got.

I think Kristen is toast this week. The only shot she has is the POV is she get that the brigade can kiss one of there buddies good bye

This POV should be interesting

Have to wonder which one of there buddies they will send packing if they have to choose.

Okay I broke down and got the feeds for a couple of weeks and this is what happen today in the BB House...POV COMP Results

And to answer your question Jen, Regan is NOT on the Brenrach side...everyone is against them and playing them just so they don't come after them and btw today was NOT Matt's birthday as they celebrated on the feeds tonight. CBS has his birthday listed as being in September...Sheesh ...how many lies can this guy tell and not get caught?.....hahahahahah

That bums me out about Regan and Kathy. I like both of them and didn't think they were playing both sides. I am too trusting 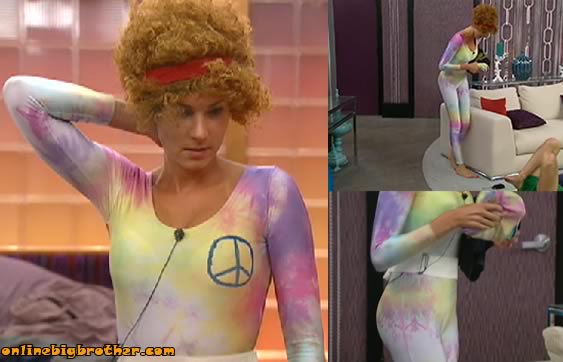 Okay I have been watching LIVE feeds today and I am sick of Britney. With just what America see's when its on TV they do not see what this chick is all about and Lane is another one. Now that I've seen these two 24/7 I am not a fan....Matt needs to go and go soon...Brenrach are in trouble if they don't win HOH Thursday because HELLOOOOOOOOOO EVERYONE wants you out!!!

Wake the hell up Brendon and see that you both are being played before its too late and you walk out to Julie in a week....OMG I scream at the live feeds for how stupid someone so brilliant is suppose to be who can't see what is going on....

Okay now where is my xanax!!

Wish we were neighbors.

Although, I would never get work done.

OK who needs to go

First Matt what an ass !! lying SOB if there is such a thing as karma he is in DEEP SHIT (with out a paddle)
next Britney.
Then Brenchal there just annoying. She is all smitten and he is just playing her.
Hayden and Christan are just tards like everyone in that house doesn't know there screwing around geee how stupid do they think these people are

Enzo cool cat but he's not all that ~ like he thinks.
Kathy and Regan I like them both they don't seem all that catty and appear to be genuine. neither of them seem to like Brenchal but they would annoy me too.